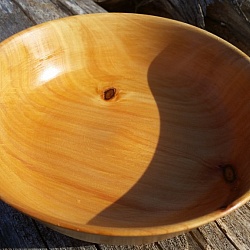 Category: woodturning
This simple wood bowl was turned out of Macrocarpa, it is 190mm wide, 52mm high, with 45mm internal depth, it has had Boiled Linseed Oil burnished into the grain during the sanding process up to 240grit leaving a smooth finish that shows off the grain and wood feel of the material.Below is a photographic workflow of the turning process with some brief explanations. Figure 1: Blank of Macrocarpa mounted onto the Lathe using a Worm Screw. Figure 2: Rounding the blank, working out the diameter and starting to shape the outside of the bowl. Figure 3: Continuing to shape the outside of the bowl. Figure 4: Creating the recess for turning the bowl around to mount for turning using the Dovetail Jaws. Figure 5: Shape done, recess made with a centre flourish, and starting to sand from 40grit and working up to 120grit. Figure 6: Waiting for Methylated Spirits to dry, which raises the Knapp allowing the next process to take up the Boiled Linseed Oil. Figure 7: After coating with Boiled Linseed Oil and rubbing in using friction until the paper stops removing oil. Figure 8: Turned around and mounted on the chuck. The centre hole is from the worm screw. Figure 9: Removing the bowl material starting from the outside to remove the outside weight. This helps to keep the piece balanced. Figure 10: Starting to remove material from the centre. Because of the shape of the Bowl Gouge, it is necessary to remove material further in to avoid catches. Figure 11: An action shot taken by my 10yr old daughter, trying to catch the motion of the shavings flying out of the bowl as it's being cut. Figure 12: Using the same process as the outside of the bowl, sanding from 80grit to 120grit then using Methylated Spirits to clean the grain and raise the Knapp then Boiled Linseed Oil burnished in, then sanded up to 240grit. Figure 13: The bowl was finished with a clear satin lacquer to retain the natural wood feel. Figure 14: Another angle of the bowl. Figure 15: Bottom of the bowl, showing the outside shape and flourish in the recess. Figure 15: Width of the bowl, 190mm. Figure 16: Height of the bowl, 52mm.
View 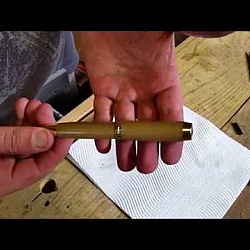 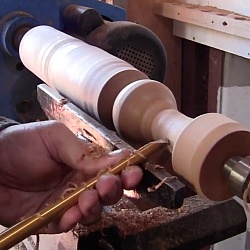 Category: woodturning
Made as a prototype to get an idea for shape for some Floor Standing larger Holders. Music from freemusicarchive.org.
View 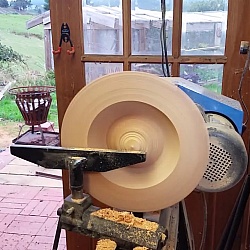 Category: woodturning
The process of how I turn Bowls and Platters. This one is made from Macrocarpa Pine from an old burnt log that was on our property when we moved in, and I've been cutting bits from it every since. Music after the Introduction is Lords of Iron (Celtic Music) by Antti Martikainen Music, if you like his music please show you support by purchasing his album/s: Antti Martikaine
View 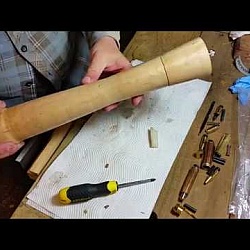 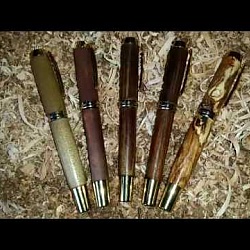 Category: woodturning
This is a sped-up process of making Multiple Rollerball Pen kits. The pens shown in this video have already been sold, we'll have more available soon, and will appear at the bottom of this page when they do, The Pen Kits in the video were supplied by Timberbits. The Music in the video was supplied by AmpleTunes.
View

Proceed to Checkout
How to look after your timber product